APPLY NOW!
Program
We know nothing.

The breakneck advances in technology have led to the next industrial revolution. For the first time in recent history no-one knows how the future is going to look like. Interaction Designers are in the center of this transformation: it is in our hands to create the future that is based on human values, needs and behaviours. 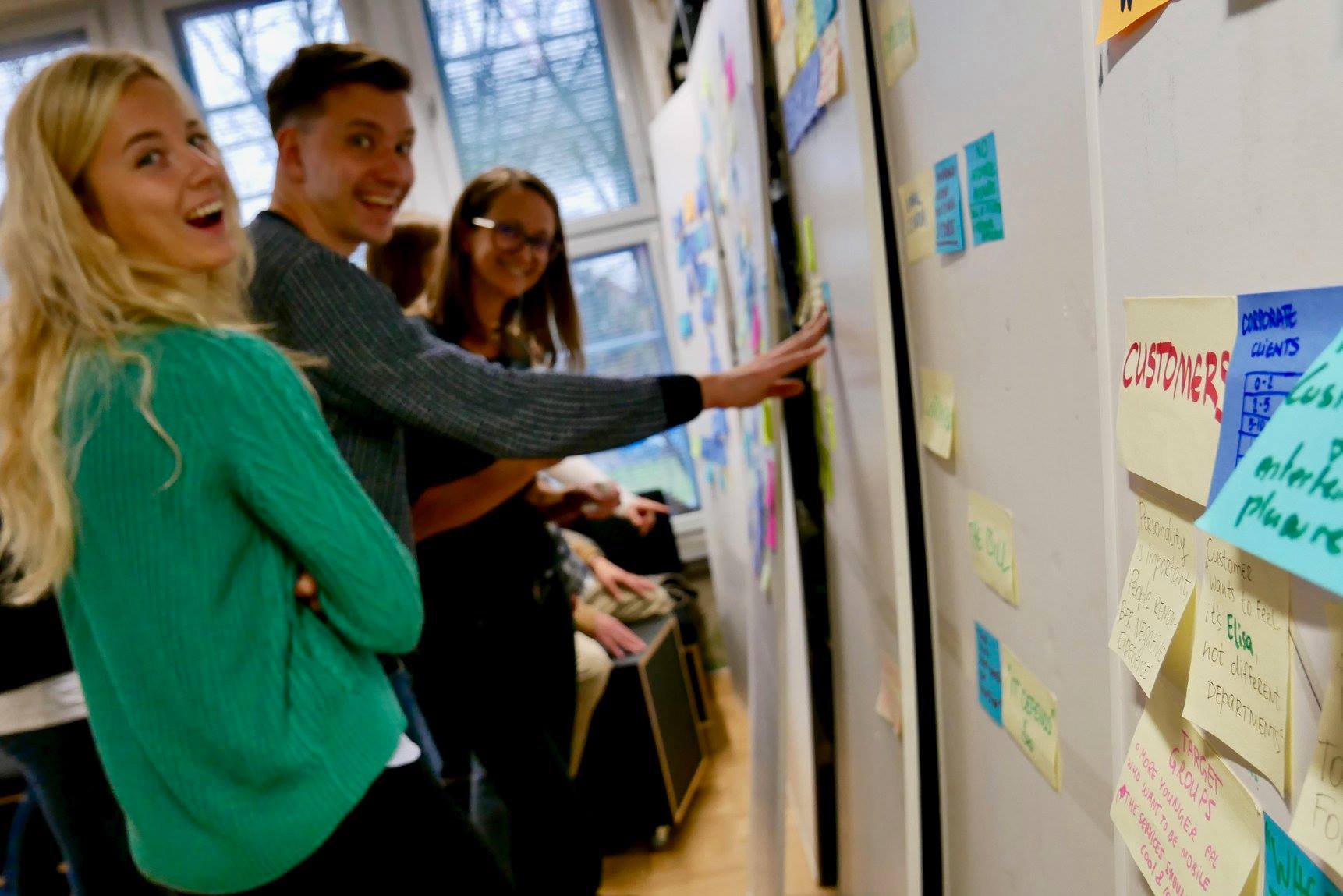 Technology is becoming omnivalent, intelligent and emotional.  No longer a tool to pick up and use, it is starting to fulfil its premise by augmenting our abilities as human beings.  So we are no longer designing the technology, but rather the relationship we are having with it. It has to be meaningful and valuable. It will have its ups and downs, excitements and bores, it will start, evolve, and end. All this has to be catered for from the human perspective.

The world we are designing for is developing extremely fast. We are not — we resist, adapt, and eventually embrace change. Thus we must take human beings as the unchanging cornerstone, the basis on which to build our designer attitude, approach, and methodology. At IxD.ma, the study starts from the human centered, but has its finger on the pulse, quickly adapting to the world, and always looks into the future.

Human-centered design is no longer enough. In order to enhance our living standards after generations of exploitation, we have to look beyond human needs when designing the tomorrow. We have to consider those of the planet. Interaction designers have great impact on how people interact with the world around them, we are able to shape the human perception, even values and behaviours. Creating a positive future is in our hands. 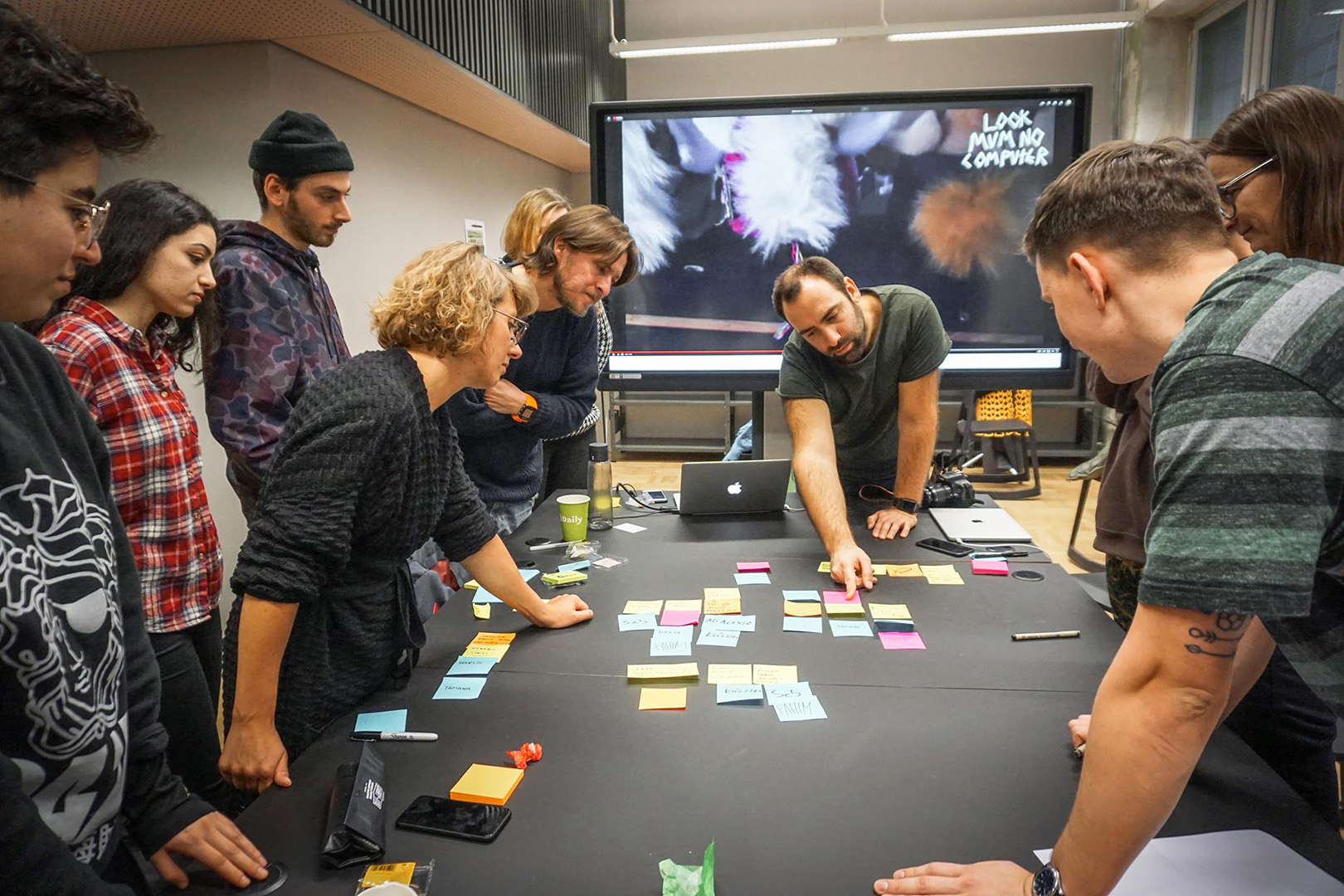 From makers of things to problem solving innovators — the designer’s job description is in constant motion. This is why we concentrate on the core attributes of a designer: first and foremost the mindset—the thinking, values and attitudes, then the skillset, and only then the toolset.

Being a designer means developing a certain personality. Designers are curious and not afraid of confusion, experimentation or failing. They can be critical to create clarity, and creative to build ideas. They can see the big picture, but also be meticulous about details. Designers are humble, care about and fight for the people, and the planet we live on. 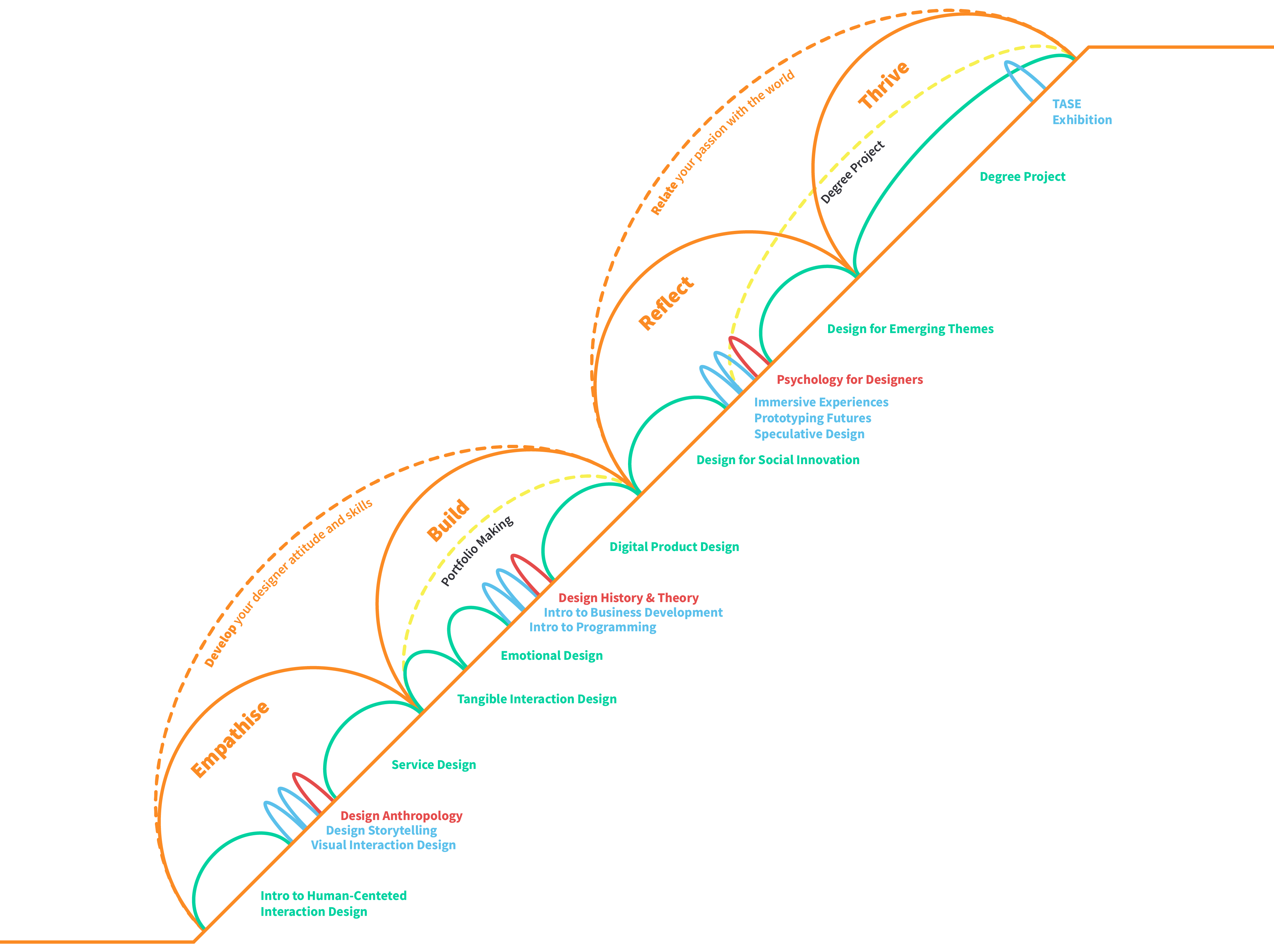 The studies at IxD.ma are experiential and studio based. You develop your designer intuition, experience and portfolio through constant iteration, guided by mentors—passionate industry practitioners, who use their experience to guide you through challenging projects.

Designers think by doing. The second semester focuses on interactions with technology, and building and developing ideas by making them tangible and actionable.

The goal of this project is to explore interactions beyond screens and involve senses beyond sight in our design process. You will get your hands dirty with paper prototyping, soldering, electronics, maybe even woodworking and 3D-printing.

The main project of the semester, this project is an industry collaboration. You’ll be again going through the design process, this time concentrating your effort on ideation, prototyping, validation and storytelling.

The aim of this project is to explore the often overlooked emotional side of design. You will focus on mobile experiences, learn the methods that go into designing for applications, and see that emotional design is a fundamental aspect that separates great design from the good.

This is a fast-based introduction to customer-centered business development. You will learn to define clients and their needs, generate plausible business models and value propositions.

Either you’re looking for work or an internship, an outstanding portfolio is the key for a successful application. We will follow through a series of sessions throughout the semester to help you design and craft it. In the first part of the class you'll learn the designer fundamentals of HTML/CSS coding, to give you more freedom in the portfolio design process.

Design in the Changing World

To make more educated decisions as a designer, it’s a prerequisite to have an understanding of where our craft is coming from, where it is and where it might be going. In this course, you will learn to navigate in contemporary design disciples.

Building empathy is a designer's core skill. In the first semester we focus on interactions with humans, and focus projects on user research and opportunity-finding.

This introductory project will get you familiarised with the principles and methods of human centered design. It will be also an introduction to the culture at IxD.ma, our methods for working, collaborating, reflecting, and learning.

The border between products and services has become almost non-existent. The main project of the semester, this course will guide students through the service innovation journey, focusing heavily on the exploration and definition phases. Solving problems starts with asking the right questions.

Starting from the underlying principles in composition, typography, colors etc, this course will give you the much-needed fundamentals of visual design, and after that, interface design.

Getting your message across effectively is one of the core skills for designers. This course lays out the fundamentals of design storytelling and gives practical skills focusing on the video.

This course introduces a general overview and the methods of applying anthropological user research methods to the design process.

The fourth semester is for refining and developing expertise in your focus, and proving your maturity as a professional.

The degree project is an individual self-initiated project, that will provide you with an opportunity to develop your point of view, design approach and the management and communication skills inherent to a professional creative.

The possibilities to use design for research are endless, and we have just scratched the surface during our two years in school. This course is our last deep dive on the subject, to give a bit of new perspective and inspiration to the degree project journey.

Each team ends their studies with a big exhibition, showing off their degree projects.

It is time to reflect on our progress, and look into the future. Human-centred approach is no longer enough, what is next? The third semester focuses on interactions with broader impact.

Cultural and technological advances open up new opportunities, and with them new problems. Humans are reluctant to change and governed by preconceptions, instincts and habits. Designing for social issues often requires designing for behavioural change.
We as interaction designers possess the right mindset and skills to do that — to see through symptoms, to uncover hidden problems, and to act upon discovered opportunities — all by building empathy. This is an incredibly powerful skill to have, and with that power, comes responsibility.

The topics in interaction design are constantly emerging due to advances in society and technology. Interaction designers need to stay updated with the latest trends in the field, as it is expected from us to pave the way into the unknown future, uncover and address the hidden challenges and opportunities that accompany change.
This course will provide you an opportunity to design for currently emerging themes, such as AI, IoT, climate change, and many others.

Virtual and augmented reality are two technologies that will play a big role redefining the way we communicate with machines and each other in the upcoming years. In this short course, you will explore what kind of new possibilities are emerging, how they affect us, and how to design for them.

As we work in more complex themes and situations, we find ourselves designing not for, but with people. Co-creation sessions, exploratory workshops, culture-building seminars etc — facilitation has become a necessary skill for a 21st century designer.

IxD.ma's focus is on creating the future. Sometimes we need to take a critical stance in our design, and build future scenarios and artefacts that are specifically designed to provoke reflection and discussion.

Being a true human-centered designer assumes understanding how people work. This more theoretical course will introduce you to the practical fundamentals of psychology that designers can use to better make sense of people and their motivations , and design interventions that address our subconscious mind.

Our approach is practical. In  collaboration with top industry partners — Estonian startups, government sector, telecoms, NGOs — each semester, we work on real life briefs, real life problems and real people to discover hidden possibilities of innovation and come up with forward-looking concepts that are grounded in reality. 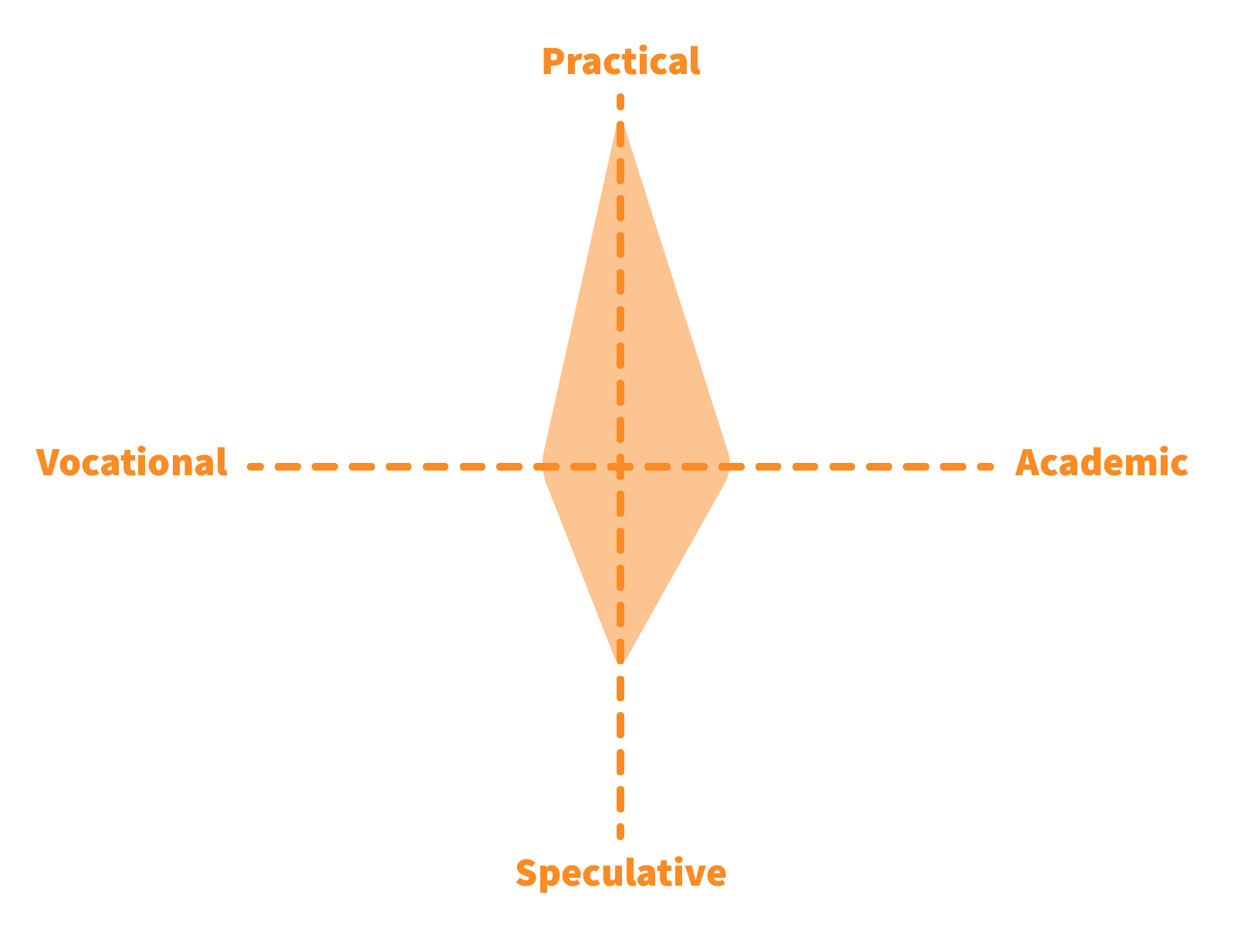 Design is a very open community, there’s an abundance of methodologies and materials out there. Anyone can learn them. But it’s a matter of practice, failing, reflecting, and trying again, to actually start thinking like a designer. We aim to create a safe environment that encourages risk-taking and fosters creativity by being open, honest, fun and reflective.

We emphasise diversity, as it is essential to innovation. At IxD.ma, you’ll be working alongside students from many different professions, backgrounds and cultures. You’ll be collaborating with students from other disciples, programs and universities. This creates a platform for new ideas and a mutual learning experience. After graduation you will be well equipped to run complex design development projects and to manage international multi-disciplinary teams. 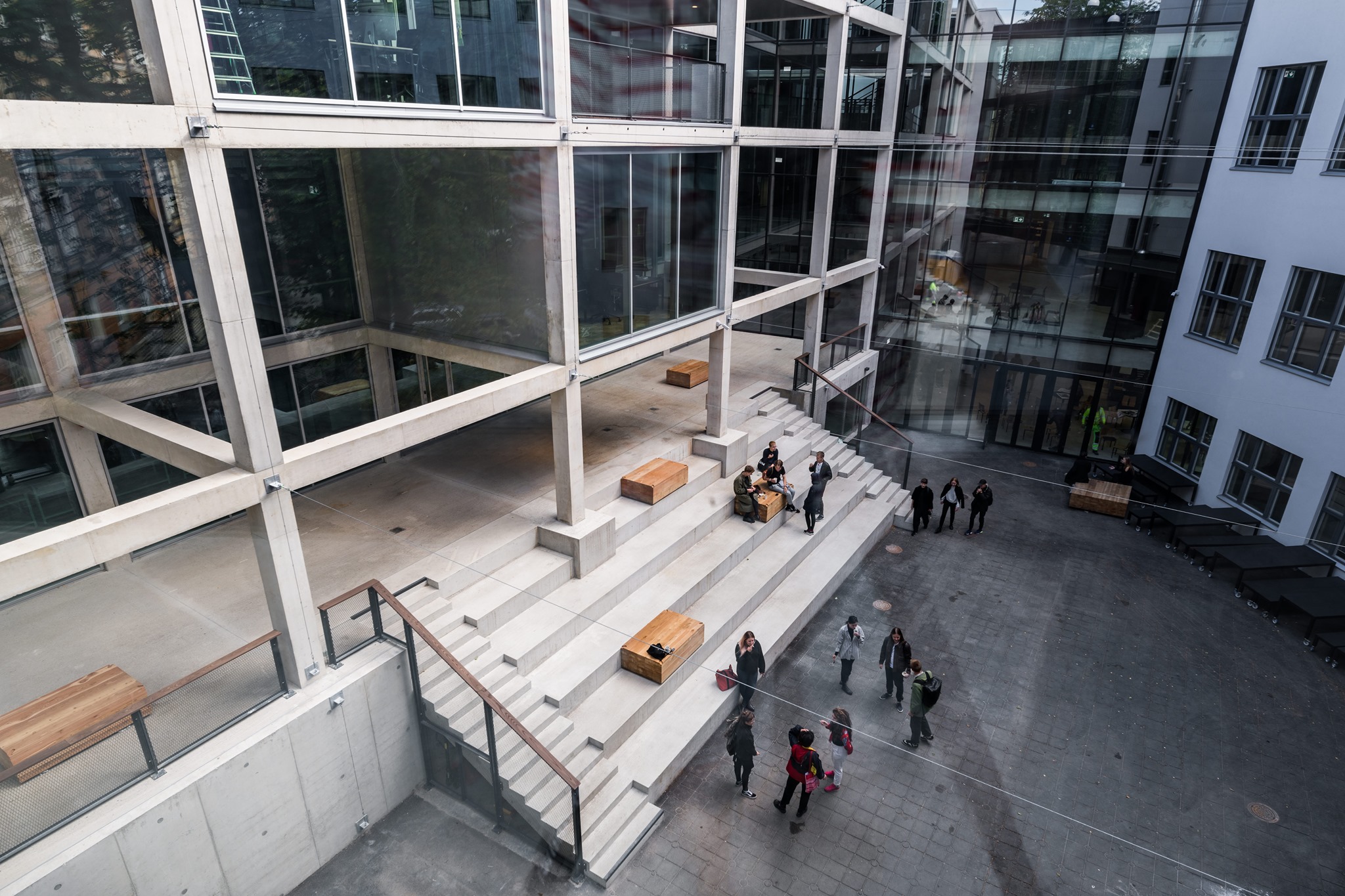 Estonia, in Northern Europe, is home to a small population and a thriving economy. Dubbed as the "First Digital Nation" or the "Silicon Valley of Europe", it's a country with most start-ups per capita, and the Internet declared as a basic human right.

Being a digital nation, the country faces a great industry demand for designers. Start-ups are constantly on the lookout for talent, and the government sector is open for innovation.

No traffic jams, get anywhere in ten minutes and the prime minister is one call away. Being in a small nation means having easy access to the industry, agility to move fast, and having time to spend on things that matter.

Estonia has a long but mixed history. While culturally enriching, some of the past experiences have also given a blow to the country's economy. It is developing extremely fast, but for now still a reasonably priced option for students.

watch a video about estonia

Established in 1914, the Estonian Academy of Arts is one of six public universities in Estonia. It combines an unique mix of heritage and cutting-edge, as its small size allows for agility and constant innovation.

EKA is a school of 1000 students and 1:3 teacher-student ratio. This means that individualised study and personal mentorship are at the core of your development.

EKA hosts a multitude of creative departments, many of which have been operating for close to a century. You are welcome to get inspired by textile and fashion designers, blacksmiths, ceramists, sculptors and many others.

In 2018, EKA moved into brand new campus right in the middle of local cultural hotspots. VR Lab, Prototyping Lab, Woodworking Studio, Photo Studio, Equipment Rental and others are at your disposal to engage your creativity. 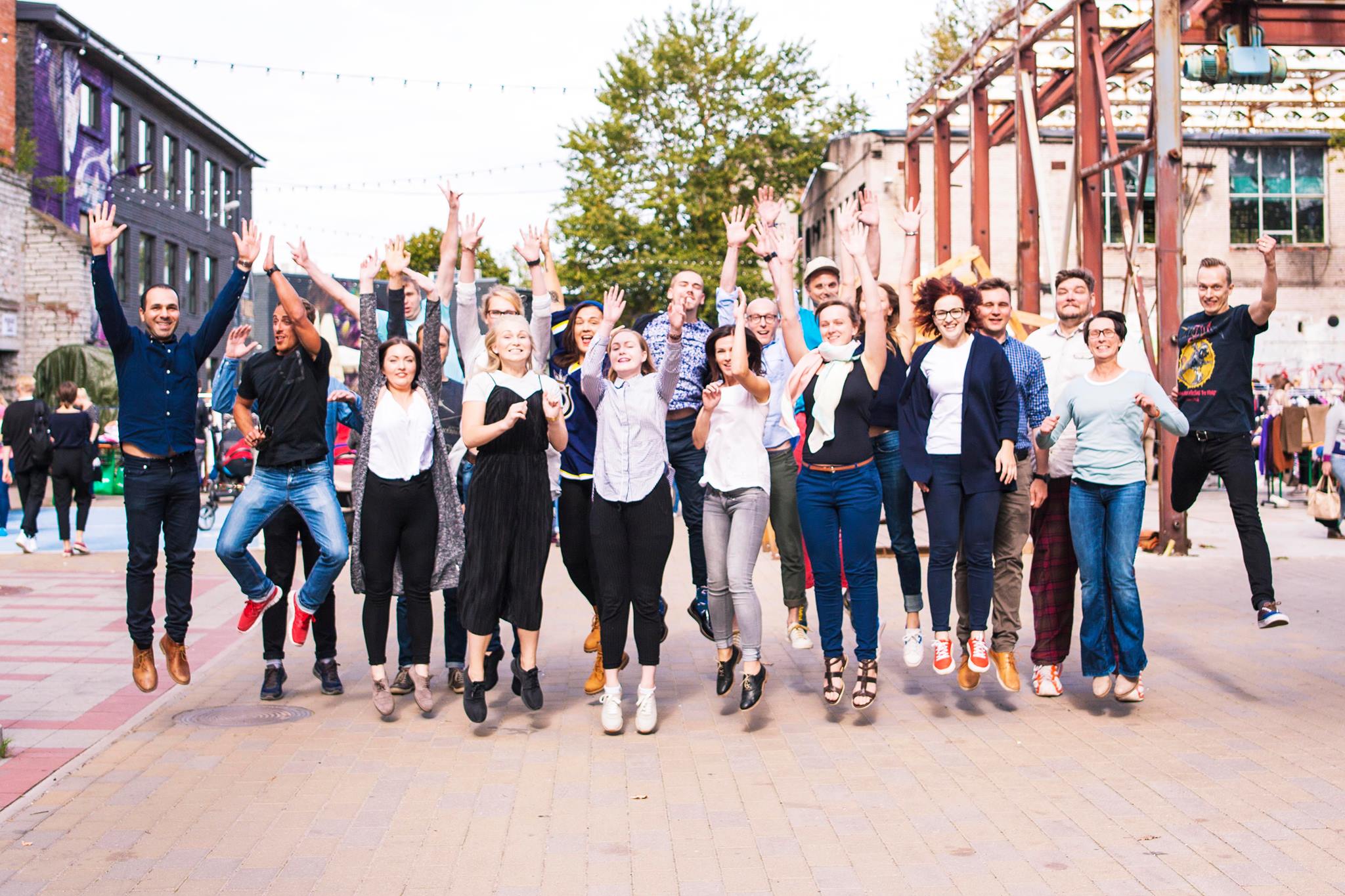 The IxD.ma was born out of necessity for designers in a digitally advanced nation.

Launched in 2016 by Kristjan Mändmaa (EKA), Amid Moradganjeh (IDEO) and Keit Ein (FLUX), input from top design teams across the Globe was used for establishing the initial approach, methods and curricula. Ever since, the program has been in constant development, quickly becoming the most popular masters' program in the school and is today attracting great minds from across the Globe.

Work
with us
We partner with startups, NGOs, enterprises and the government sector to bring human centered innovation to their products, services and experiences.
LEARN ABOUT PARTNERSHIPS
Study
with us
We welcome students from all backgrounds and prepare you for a future as an interaction, service, systems, product or user experience designer.
LEARN ABOUT the program

IxD.ma is an international master's program in Interaction Design at the Estonian Academy of Arts.
We focus on human interactions with services, products and experiences.
ixd@artun.ee · +372 5687 5058 · Põhja pst 7, Tallinn, Estonia